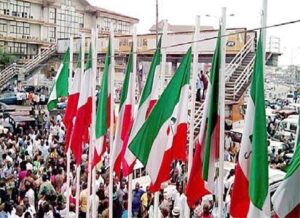 The opposition Peoples Democratic Party (PDP) has expressed disappointment over the stance of President Muhammadu Buhari on state police.
President Buhari had in an interview on Channels Television on Wednesday, monitored by Naija News, said state police is not an option in solving the security challenges in the country.

“State police is not an option. Find out the relationship between local governments and the governors. Are the third tier of government getting what they are supposed to get constitutionally,” he had said.

Reacting to the comment, PDP National Chairman, Iyorchia Ayu, said the president’s rejection of the state police shows that his government is not interested in solving the insecurity in the nation.

Ayu stated that the call for state police was made by Nigerians, urging the president to do the will of the people he swore an oath to serve.

In a statement released on Wednesday night, the PDP chairman asserted that Nigerians will not accept his rejection of state police.

He said: “Watching President Muhammadu Buhari this evening on Channels TV during an interview session was a gratuitous waste of time because there was nothing new coming from the President.

“As has been said by many before now, to expect anything new from our President would be a misplaced and unfortunate expectation. From the economy to insecurity, killing of innocent farmers by terrorists (which some erroneous term farmer/herder clashes) and other sundry issues, President Buhari honoured his calling as a President who has nothing new to offer.

“In President Buhari’s view, State Police is not an option. Yet, it appears the continued killings in some localities of Nigeria, particularly in the North, and more specifically in his home state of Katsina, may not matter, hence, the need to have a security system that feeds on local intelligence and nuances, which the federal police cannot adequately provide, is not an option to our President.

YOU MAY ALSO LIKE:   Eid-Al-Fitr: Buhari calls for joint prayers against tragic incidents of kidnapping, banditry

“To him, it appears that continuing the same process while expecting a different output and outcome is the best way to go. We ask, is he comfortable with the killings in the land while the status quo persists?”

Previous 2023: I Don’t Care Who Becomes President…My Preferred Candidate May Be Eliminated — Buhari’s Confusing Position On Successor
Next Police Officer Commits Suicide Over Alleged Delay In Payment Of December Salary