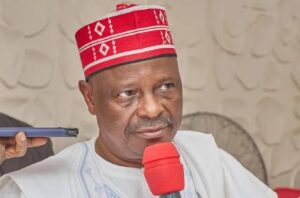 Senator Orji Uzor Kalu has described Senator Rabiu Musa Kwankwaso as the biggest problem of the All Progressives Congress (APC) and the Peoples Democratic Party (PDP).

Naija News reports that since Kwankwaso joined the New Nigeria Peoples Party (NNPP) from the PDP, the party has gained popularity.

Speaking to Channels Television on Monday night, Orji Uzor Kalu stated that the too major political parties must be aware of the threat posed by the NNPP.

He stated that if any of the major parties zone its presidential ticket to the South, they should forget about producing Muhammadu Buhari’s successor.

Kalu said, “Let me tell you that whether in APC or PDP, the problem we have now is Kwankwaso. Our problem is not APC or PDP. Because Kwankwaso is already a presidential candidate we are in problem.

“We are forcing every party – that is what I saw – to pull out. Because of Kwankwaso if you give me the ticket from the South East, I will lose and it would not be good for us.

“Kwankwaso left PDP and went to NNPP and if PDP or APC zone its presidential ticket to a candidate in the southern Nigeria, then Kwankwaso is a president in waiting. I can assure you that knowing the mentality on the ground, unless we are telling ourselves lies.

“I cannot lie to myself; I’m a student of realism. So Kwankwaso is the problem because if PDP goes to North and the APC goes to south it’s as well telling myself to pack my luggage and go. I’ll not have a job in the National Assembly or the federal government of Nigeria. That’s the truth. Whether you want to believe it or not, Kwankwaso has changed the dynamics.”