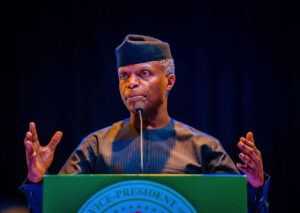 The Vice President, Yemi Osinbajo has asked Nigerians to ignore one Olugbenga Olaoye, Co-Convener, ‘Osinbajo Think Thank’ over his comments during an interview.

Olugbenga while reacting to the presidential ambition of the national leader of the All Progressives Congress (APC) Bola Tinubu in an interview with Arise TV said Nigerians do not want another sick president who would be embarking on foreign medical trips.

He said Nigeria needs a capable person like the Vice President who formally declared on Monday to run for the top political office in the 2023 elections.

Osinbajo while reacting to the comment through his spokesman, Laolu Akande, said Olugbenga does not represent the office of the VP and should be ignored.

YOU MAY ALSO LIKE:   (VIDEO): Wike Spotted Dancing His Heart Out Few Hours After Court Suspends Secondus As PDP Chairman

In a tweet on his official Twitter page, Akande claimed that he is not aware of the Osinbajo Think Tank group

The tweet reads, “Indeed this gentleman does not represent the VP nor the Office. His views are completely & totally his own. This particular opinion he has expressed on TV is deplorable and in bad taste. I am not even aware of the so-called Osinbajo Think Tank he purports to represent. Pls IGNORE”

YOU MAY ALSO LIKE:   Lionel Messi Breaks Down In Tears As Football Legend Says Goodbye To Barcelona
Buhari Osinbajo Tinubu 2022-04-13
Oluwasegun Adesuyi
Share