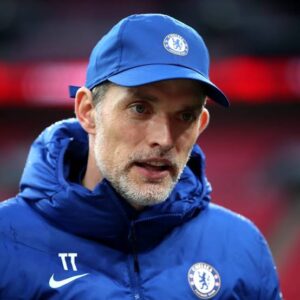 After suffering defeat to Real Madrid at Santiago Bernabeu, Tuchel during an interview faulted Szymon Marciniak for not reviewing VAR himself when Marcos Alonso’s goal was overruled.

Tuchel’s side went to Spain on Tuesday after going down 3-1 at Stamford Bridge in the first leg of the clash.

But the Blues made an impressive start leading the Madrid 3-0 by the 75th minute. The match was forced to the extra time where Madrid squeezed in 2 goals to qualify on 5-4 aggregate.

“I think this is the very, very worst time to do this,” Tuchel said.

“After 126 minutes with one team giving their heart and desire, fighting to the very last drop.

“I know Carlo is a gentleman and a nice guy but when I wanted to go and say thank you (to the referee, Zymon Marciniak) I see him smiling and laughing loudly with the opponent coach (Ancelotti). I think it’s very, very bad timing.”

The Blues manager also expressed disappointment that the referee failed to review a goal scored by his team in the 62nd minute which was cancelled by VAR.

YOU MAY ALSO LIKE:   Again, NNPC Releases Fresh 516.43 Million Litres Of PMS To Nigerians

Tuchel lamented, “If you play against Real Madrid you can maybe not expect everybody to have the courage. I felt little decisions went against us also in the first leg and today as well.

“I did not see the goal but I told him I’m super disappointed he didn’t go to check it himself. You should stay the boss and not give decisions like this to somebody in a chair and isolated from the atmosphere.

“A referee has a certain style, things he allows and doesn’t allow, so I think he should stay in charge and check it on his own, then he could explain it better.

“But this is just my opinion. Maybe it’s too much to ask for in matches like this against this opponent.”