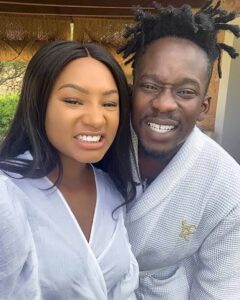 Award-winning Nigerian singer Oluwatosin Ajibade, better known by his stage name Mr Eazi, has received a gift from one of his friends after his proposal to his long-term girlfriend Temi Otedola.
Recall that the singer/businessman got on one knee and proposed to the billionaire’s daughter over the weekend.

Congratulating him on his new engaged status, Eazi’s doctor sent him £1,000

Mr Eazi and Temi dated for six years before deciding to get engaged. The duo met through Temi’s sister DJ Cuppy.

The couple have a podcast together where they share insights on their relationship.

In one of their podcast episode the couple revealed Mr Eazi pays for their dates while Temi is responsible for planning them.

Temi stated that she has no problem paying for dates because she doesn’t believe in the social construct around the gender roles that put it upon the man to pay for dates, but Mr Eazi does not care.