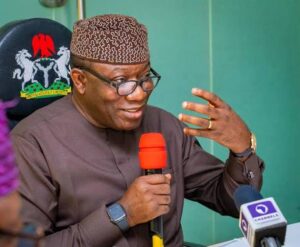 Chairman of the Nigeria Governors’ Forum (NGF), Kayode Fayemi, will declare his aspiration in respect of the 2023 presidential election at the end of the ongoing Ramadan.

Fayemi, the Governor of Ekiti State, feels that the season of Ramadan and the lent period were sacred for political games.

Fayemi had been making moves to secure the attention of President Muhammadu Buhari. The 57-year-old followed President Buhari to his office on Thursday after the Council of State meeting in Abuja.

Fayemi previously served in office as Ekiti Governor between 2010 and 2014 before losing re-election to Ayodele Fayose. He was also the Minister of Solid Minerals Development in President Buhari’s cabinet from 11 November 2015 to 30 May 2018, when he resigned to contest for a second time as Governor of Ekiti State.

So far, no fewer than eight aspirants in the ruling All Progressives Congress (APC) have declared their interests in taking over from Buhari when his tenure expires on May 29, 2023.

YOU MAY ALSO LIKE:   How Tinubu Worked His Way Up To Success From A Taxi Driver To Become One Of The Most Powerful Nigerian Politician
2023 presidency: Fayemi to declare for 2023 presidency after Ramadan 2022-04-16
Oluwasegun Adesuyi
Share