2023: Posters Describing Osinbajo As A Betrayer Surface In Abuja 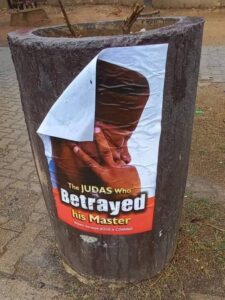 Photos of posters describing the Vice-President and 2023 presidential aspirant, Prof Yemi Osinbajo, as a betrayer, have surfaced in some parts of the Federal Capital Territory, Abuja.
The poster shared on social media, depicted a photo of Osinbajo being described as “the Judas who betrayed his master” urging him to repent as Jesus was coming soon.

The poster surfaced shortly after the vice president addressed Nigerians on his decision to run for the office of the President in 2023, a position his political godfather and APC leader, Asiwaju Bola Ahmed Tinubu is also interested in.

Recall, that in a tweet via his Twitter handle on Monday, Osinbajo stated that his decision to join the presidential race is to contribute his quota to the development of the country.

He said; “I am today, with utmost humility formally declaring my intention to run for the office of the President of the Federal Republic of Nigeria on the platform of APC.”

Reacting to Osinbajo’s declaration, Tinubu, on Monday, stressed that he did not have any son old enough to make such declaration.

Tags 2023: Posters Describing Osinbajo As A Betrayer Surface In Abuja