Home / cover / 2023 Presidency: Set Back For Tinubu As Party Caucus Lobbies Govs, Obas To Back Osinbajo For President

2023 Presidency: Set Back For Tinubu As Party Caucus Lobbies Govs, Obas To Back Osinbajo For President 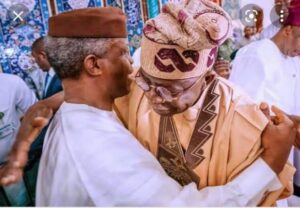 South West Movement for Osinbajo (SOWEMOVE) has urged governors and traditional rulers in the region to prevail on the former Lagos State Governor, Asiwaju Bola Ahmed Tinubu to step down for Vice President Yemi Osinbajo in the battle for the ticket of the ruling All Progressives Congress (APC) in 2023.

The group described Osinbajo as being most excellent while APC leader, Asiwaju Bola Ahmed Tinubu is described as an outstanding leader who can further advance national interests by endorsing the vice president.

Presenting a report and copies of several correspondences with Obas and other eminent personalities in the South West to the Director of Operations of The Progressive Project (TPP), Alhaji Aliyu Usman Aliyu in Abuja during the weekend, the group said youths of the region will become arrowheads of efforts towards making Vice President Yemi Osinbajo, successor to President Muhammadu Buhari.

In his brief response, Alhaji Aliyu Usman Aliyu explained that the TPP is going to be an umbrella organization for all Nigerian groups at home and abroad who are canvassing for the success of APC and that of Professor Yemi Osinbajo in the 2023 elections.

“Our progressive cause is borne out of conviction and devoid of negative sentiments that becloud politics in most parts of the Third World; we objectively see Vice President Yemi Osinbajo as the best towards sustaining the legacies of President Muhammadu Buhari and moving Nigeria forward,” Alhaji Aliyu said.

In the various correspondences sent to Yoruba elites, titled “2023: Appeal to South-West Elders/Leaders” and signed by both its Coordinator, Abioye Akerele and Secretary, Olugbenga Byron, the group stated that Nigeria’s Presidency may elude the South West in 2023 if Prof. Osinbajo is not supported for the presidency.

“Not too long after the Moshood Abiola political era, our emphatic strides within the Nigerian power equation is being threatened and today, there are obvious political traps with the potential to dislodge the South West from a vantage point through which we ought to ascend higher, to real power at the centre.

YOU MAY ALSO LIKE:   Nigeria Police Force Extradite Fleeing Abdulrashid Maina back to Nigeria

“If current realities are not adequately weighed, using the wisdom of elders like you, the South West may play itself out of the power equation in 2023,” the group stated.

It added that the dynamics of politics of the 2023 general elections are gradually manifesting in different forms, the group lamented that the South West still appears aloof.

“He (Tinubu) is one leader out of many who has been actively involved in the struggle towards making Nigeria work, he is unique in all respects, irrespective of whatever one may think of his political method.

YOU MAY ALSO LIKE:   Special Tawaf: Tinubu Thanks Obasa, Wants More Prayers For Nigeria

“In the light of the above, we, members of the South West Movement for Osinbajo believe that our revered Obas across Yorubaland, the APC Governors in the South West geo-political zone, all Yoruba political elites, business moguls and leaders of thought should now rise to prevail on Asiwaju to invest his political capital in the person of the Vice President, Professor Yemi Osinbajo, in the overall interest of the Yoruba people.

“We cannot afford to keep distracting ourselves with wrong steps and faulty strategy at the risk of neglecting the very core of our geo-political zone’s priority of regaining power at the centre and actualizing further positive impacts for ourselves and the entire federation come 2023.

“Today, he sits in vantage position and he is greatly enriched with great purposeful insights into what needs to be done towards achieving lasting change; as the number two in Government, he is the closest to the highly coveted seat.

“Prof. Osinbajo has the requisite character, capacity, capability and the intellect to run Nigeria to the satisfaction of the generality of the Nigerian populace.

“We therefore call on you and our entire Yoruba leaders not to “siddon look” by watching while some South West politicians take wrong steps in the on-going political calculations; we must not allow a drift that will only take us all to a chaotic spot, only to then begin seeking desperate solutions.

“We believe strongly that Prof. Yemi Osinbajo is our sure bet for 2023 in the entire South West and we need Asiwaju Bola Ahmed Tinubu as the principal game changer to support this bid.

“For the sustenance of the South West’s political relevance in the Nigerian federation and in the larger interest of all Nigerians, it stands to reason that we stand firmly behind Prof. Yemi Osinbajo’s candidature for President come 2023.

“As the number two to President Mohammad Buhari, he has demonstrated obvious capacity and capability to re-invent the wheel of progress for national growth and development.

“He has won the confidence of Nigerians across various divides by the way and manner he has conducted himself as the Vice President of the Federal Republic of Nigeria.

“We therefore plead earnestly that our leaders and elders in the South Western Zone must not allow the conflicting interest of a few to destroy the very bright political chances of our entire region in the 2023 Presidential Elections.

Previous BREAKING: Drama In Anambra As Police disconnect Gen at INEC HQ over unpaid feeding allowance [PHOTO]
Next THE RISE AND SHAME OF THE VLOGGER MAUREEN BADEJO