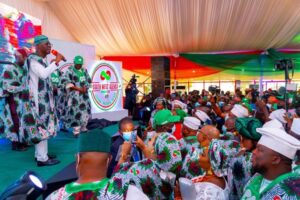 A group loyal to Bola Ahmed Tinubu, the South West Agenda for Asiwaju (SWAGA) Thursday officially launched in Lagos State.
Tinubu, a leader in the ruling All Progressives Congress (APC), was governor of Lagos State between 1999 and 2007.

Tinubu is rumoured to be interested in succeeding incumbent President Muhammadu Buhari in 2023 after the expiration of his second term in office.

However, despite a campaign by these loyalists, Tinubu is yet to make any public pronouncement about his ambition. 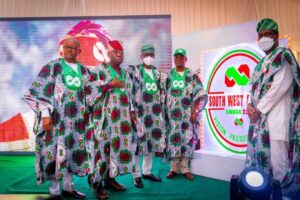 Meanwhile, Thursday’s public launch of SWAGA in Lagos was attended by the state Governor Babajide Sanwo-Olu and hundreds of Tinubu loyalists across the country.

“With serious determination to succeed, Lagos shall stand still for Swaga 23,” said the leader of the group Dayo Adeyeye.

In the last few months, the APC leader has been in London where he is recuperating after undergoing surgery.

SWAGA’23 has already been launched in Oyo, Ogun, Osun, and Ekiti.

“It is indeed a payback time for our national leader, who through his years of service contributed to the lives of many others and today you can see his footprints across the country.

“We shall continue to appeal to him to contest for the position of the President of the Federal Republic of Nigeria because governance is not what to be experimented with.

YOU MAY ALSO LIKE:   Double Honour as CIPRMP and Avance Media Induct and Nominate Seyi Tinubu

“Therefore, we need a viable, experienced and a man who understands the diverse nature of the Nigerian economy,” SWAGA said in a statement.