Home / cover / 2023: Tinubu Reveals How Long He Plans To Stay In Power

2023: Tinubu Reveals How Long He Plans To Stay In Power 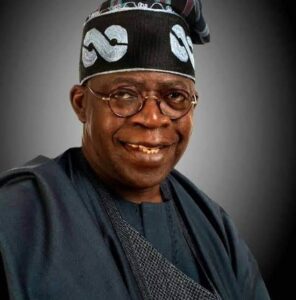 APC Chieftain and presidential aspirant, Bola Ahmed Tinubu has revealed how long he plans to spend in power.
He stated this during his presidential consultations with traditional rulers in Ondo state.

The chieftain said that he is the best candidate for the 2023 presidency and he would not give any excuse for failure.

He stated that he would drop the baton after spending eight years in power. He went ahead to list some of the things he plans to do when he gets into power.

“When I rule for eight years consecutively I will drop it. The smartest and someone with the most followers will take over from me after I finish my term.

“I’m seriously bothered about the development of Nigeria. I was behind Mimiko for two years to claim his mandate. For Fayemi, I stood with him for three while trying to take his mandate. For Aregbesola, it was three years and ten months.

” I don’t run away from the battle. I’m very particular and passionate about democracy. During MKO we tried but we could not get it. When they came to meet us we seek your support and Buhari became the President.

“I have informed Buhari so that people would not say who did I inform before taking the decision.

” I’m the most qualified to become the president. I will ensure that our children get employed, there will be industries and all-around development across the country. “

Tags 2023: Tinubu Reveals How Long He Plans To Stay In Power