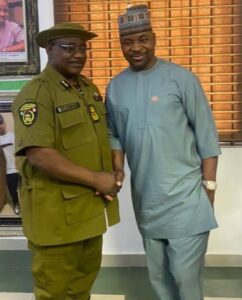 Nigerians on social media have slammed the Lagos State command of the National Drug Law Enforcement Agency (NDLEA) after its announced State Chairman of National Union of Road Transport Workers (NURTW), Musiliu Akinsanya a.ka MC Oluomo as their Ambassador of War Against Drug Abuse in the State (WADA).
Akinsanya took to his Instagram page to share a statement announcing his appointment

The statement reads; “It was a blissful gathering as the team of National Law Drug Enforcement Agency (NDLEA) led by the Lagos State Commander, Calys Alumona, visited the Chairman of NURTW, Lagos State chapter, Alhaji Musiliu Akinsanya (Mc-Oluomo) to sensitize people to desist from drugs and other harmful substance. The team used the opportunity to enlightened the union members of the negative effects of hard drugs and how harmful it can be to their bodys and brains.

YOU MAY ALSO LIKE:   Workers’ Day: Ecobank Nigeria To Host Webinar On Investment Opportunities

“The Lagos State Commander of NDLEA noted that apart from the enlightenment of the NURTW members, they were also there to appoint the Lagos State chairman of the union as an Ambassador on War Against Drug Abuse (WADA). He disclosed that they have carefully monitor the life of the Union chairman and they were surprised to discover that he is a man that doesn’t smoke nor drink alcohol. He said his team and colleagues were surprised that despite all they have heard about Mc-Oluomo, from those that apparently don’t like him, he is a decent man that does not indulge in substance abuse nor encourage the use.

YOU MAY ALSO LIKE:   BREAKING: INEC Extends Voting In Anambra Governorship Over Malfunctioning Devices

“Commander Alumona urged the union members to emulate their chairman by being decent, stop taking harmful substance and other dangerous drugs.”

Some called out the anti-drug agency for making the NURTW chairman their ambassador, while other commend them for being strategic in their fight for drug use.

One Candidlady wrote; ‘What a joke’

One Flier wrote; ‘Good tactics,they know they can’t raid drug hideout if thugs are not informed’

YOU MAY ALSO LIKE:   No school is safe until govt negotiates with bandits – Gumi

One Springboot; wrote; ‘It’s actually a good idea since he doesn’t drink nor smoke and he also controls the agberos who sell these drugs, hopefully he will be able to talk to them. Drug use is getting out of hand.’

One TOPCRUISE wrote; ‘This is just laughable. Very laughable. Making the chairman of broken bottle and Dagboru as NDLEA ambassador.’

One marsup wrote; “Is this a joke? More like, Ambassador for drugs. What a time to be a Nigerian.”

One balo_ng wrote; “Well deserved appointment. He is beyond qualified for the position”

Previous 2023: Tinubu Reveals How Long He Plans To Stay In Power
Next BREAKING: Russia declares ceasefire in Ukraine