2023: Top Osinbajo ally speaks on VP not contesting against Tinubu 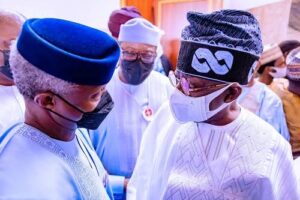 Babafemi Ojudu, special adviser to President Muhammadu Buhari on political matters, on Saturday dismissed a viral quote attributed to Vice-President Prof. Yemi Osinbajo, that he will not contest for presidency in 2023 against the National Leader of the All Progressives Congress (APC), Bola Tinubu.

But a quote linked to the Ogun-born politician seem to portray that Osinbajo has pulled out of the race. However, Ojudu, a top supporter of Osinbajo, says it’s “fake news”.

“Wherever you see this ‘broken news’ shout Fake ! Fake!! Fake!!! It is FAKE NEWS,” he said on his known Facebook page.