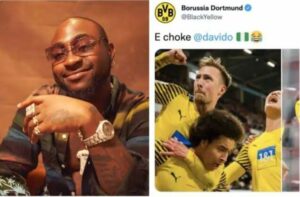 Award-winning singer, David Adeleke, professionally known as Davido, on Friday took to his Twitter account to express excitement after Bundesliga side, Borussia Dortmund used his slang, ‘E Choke on its official Twitter account.
The Bundesliga club had posted pictures of their players on their Twitter account with the caption, ‘E Choke’, popularly used by Davido.

YOU MAY ALSO LIKE:   ASUU Gives Update On Planned Strike, Slams Buhari Over Supervision Of MoA

The Davido Music Worldwide boss who was excited with the development quoted the tweet and wrote, “clear road”.

The German club also took out time to celebrate Nigerian players that have played for the club in past.