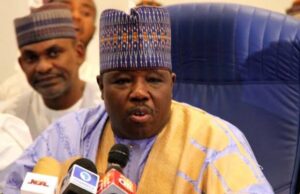 Former Governor of Borno state, Senator Ali Modu Sheriff has withdrawn from the national chairmanship race of the All Progressives Congress (APC).
Naija News reports that this is coming days before the national convention of the ruling APC, scheduled for 26 March, 2022.

Speaking to newsmen on Sunday, the former Peoples Democratic Party (PDP) chairman said he decided to step down due to the zoning arrangement in the party which has ceded the office to North Central.

According to him, he would only rejoin the race should the ruling party change its mind between now and Friday.

Recall that the APC had zoned its chairmanship position to the North-Central with Senator Adamu Abdullahi, Senator Tanko Al-Makura, George Akume amongst others all from the zone gunning for the top position.

However, former Zamfara Governor, Abdulaziz Yari has insisted on carrying on with his ambition despite coming from the North-West.

YOU MAY ALSO LIKE:   Fidelity Bank's Courtesy Visit to the Office of the Senate President of Nigeria
Ali Modu Sheriff Withdraws From APC Chairmanship Race 2022-03-20
Oluwasegun Adesuyi
Share