Home / cover / 2023: what will happen to Ministers, Appointees Who Fail To Resign – Presidency reveals

2023: what will happen to Ministers, Appointees Who Fail To Resign – Presidency reveals 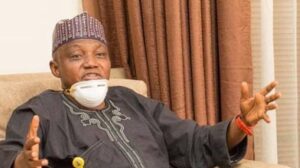 The Presidency has said ministers and political appointees who are seeking elective office but refused to resign would be sacked.

Naija News reports that Presidential Spokesman, Garba Shehu, made this known in an interview on Channels Television on Thursday.

Recall that President Muhammadu Buhari had directed members of his cabinet and other government appointees nursing political ambitions to resign before May 16.

According to Shehu, any political appointee who has political ambition but continues to stay in office “would have someone decide for him or her”.

He added that the circular of the government to the effect was issued by the Secretary to the Government of the Federation and duly approved by the President.

“We are dealing with a government policy, a government directive, a circular of the government issued by the Secretary to the Government of the Federation duly approved by the President [which] clearly states who is to go.

“So, I think that in a few occupied offices like that, you make the decision by yourself otherwise, someone would decide for you. So, that’s the point,” he said.

Speaking further, Shehu said the furore about the cost of the presidential nomination and expression of interest forms for the All Progressives Congress (APC) was unnecessary.

The presidential aide stated that aspirants can source money by various means such as donations from their supporters, associates and well wishers.

Shehu, however, said it is not the place of the presidency to direct the various anti-corruption agencies in the country to investigate the sources of funding of the aspirants.

He also suggested that the APC should not refund monies used in the purchase of the forms even if an aspirant makes a U-turn in their pursuit.

2023: what will happen to Ministers Appointees Who Fail To Resign - Presidency reveals 2022-05-12
Oluwasegun Adesuyi
Share

Tags 2023: what will happen to Ministers Appointees Who Fail To Resign - Presidency reveals