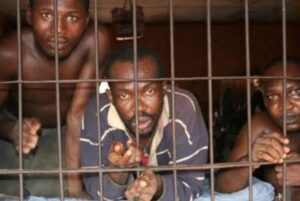 Three inmates awaiting trial at the Kirikiri Maximum Correctional Centre, Lagos, were, yesterday, allegedly shot dead while trying to escape from a vehicle returning them to custody.

A source, who pleaded anonymity, said they were brought to the Lagos State High Court, Igbosere, and on their way back to Kirikiri, their vehicle was trapped in a traffic jam.

YOU MAY ALSO LIKE:   BREAKING! IGP Removes Anambra Commissioner Of Police Over Reoccurring Killings, Violence

“They came down to escape and the arms squad opened fire on them and three of them were killed. The rest were brought to Ikoyi Prison being the closest facility because of the traffic,” the source said.

In his reaction, the Public Relations Officer of the command, Superintendent Rotimi Oladokun, said there was an incident, but no inmate was killed. “An assailant tried to interfere with the vehicle conveying the inmates and was shot by the security agents, but no inmate was affected. The inmates are still in custody. However, the incident is still undergoing investigation and our findings will be made public, definitely.”