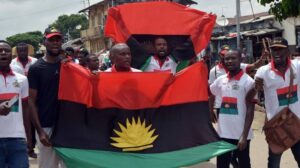 The Indigenous People of Biafra (IPOB) has accused the All Progressive Congress (APC) of planning to manipulate the November 6 Anambra gubernatorial election.

The proscribed separatist group alleged that the APC has gone to correctional facilities in the South East region to get inmates and also import non-residents into the state to vote in the forthcoming election.

The group did not provide any evidence to back its claim.

Speaking through its spokesman, Emma Powerful, IPOB alleged that APC’s primary aim is to impose a governor on the people of Anambra.

Emma called on “….the United Nations Human Rights Commission, US government; British government; Israeli government; German government; Canadian government; Russian government; Amnesty International; civil society groups in the world and all relevant and reputable human rights organizations to monitor what the APC and the government of Nigeria are doing in Biafra land, especially in Imo and Anambra States.

“We want to raise this alarm to put Ndi Anambra in particular, Ndigbo and the world in general, out of the wicked plot by the APC-led Federal Government of Nigeria to rob them of their rights to choose a leader of their choice. They want to impose another puppet in Anambra State, as they did in Imo State.

“The APC has changed election norms in the history of Nigeria. We want politicians in Anambra State to be wary of what APC is doing to them, so they can resist them.”