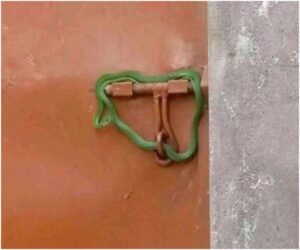 The landlord who is from the Kunda Kindu area in Kitui town of Kenya surprised locals of the town after putting up a live snake to collect his rent arrears.

YOU MAY ALSO LIKE:   Kroos Announces Retirement From International Football

The snake which is said to be diabolical was seen unmoving and failed to crawl away from the gate despite not being bound.

The tenants failure to pay up their accumulated rent arrears comprising September and October made the impatient landlord carry out such drastic action on them.