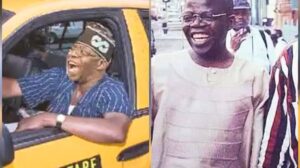 Many Nigerians believe that Asiwaju Bola Tinubu, the former Lagos state governor, was born with a silver spoon and therefore always had everything he needed as a young man at his disposal. This was an assumption which was not totally true.

The great Nigerian politician, Tinubu, worked his way up to be successful, just like any ordinary young and promising Nigerian. He even climbed the political ladder through hard work and dedication.

Today we shall be looking at the grass-to-grass story of Asiwaju Ahmed Tinubu as a young man who was once a taxi driver on the street but rose to the level of a political figure that can not be looked down upon in Nigeria at the present time.

Tinubu’s mother sold her trinkets and joined the proceeds with the money generated from the sale of the Volkswagen Beetle car given to him by his uncle to raise money for travelling.

When Tinubu was in the United States of America, he engaged in several forms of menial work to keep body and soul together and to sponsor his tertiary education. The great politician got involved in the taxi business by getting an unregistered used car which he ran as a taxi, taking passengers from the airport to their destination.

Tinubu, like every other taxi driver, faced challenges on the job, such as being slapped by a Navy officer for overcharging him because back then there was no GPRS to locate the direction and measure the accurate fees to collect. The politician has also carried a drunk man who failed to pay his fees after getting to his destination.

Tinubu did other menial jobs apart from cab driving throughout his schooling abroad and focus on his education till he graduated, and he returned to Nigeria in 1983 where he joined Mobil Oil and rose to the position of an executive of the company before his retirement.

The APC chieftain began his political career in 1992, when he joined the Social Democratic Party, SDP. This was where he gradually developed himself politically till he became a two-term governor of Lagos State and one of the most powerful politicians in Nigeria to this day.

This is a lesson for all youths to note that not everyone who is currently successful was born into a rich family. Many strive to become successful in life. People don’t know you when you are poor. The moment fortune smiles on you, people begin to recognize you.