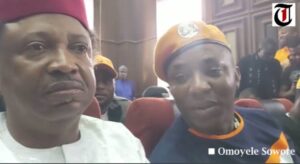 It was earlier reported that a well known human right activist, Omoyele Sowore was shot by a police officer at the Unity Fountain Abuja, while protesting.

Based on that note, the former senator that respected the good people of Kaduna Central Senatorial Zone, Senator Shehu Sani decided to speak. While speaking, he made it know that he visited Omoyele Sowore at the hospital where he is receiving treatment.

YOU MAY ALSO LIKE:   Heritage Bank promotes creative industry with support for “Rita Dominic Acting Challenge”

Going further, the former senator made it known that Omoyele Sowore is really stable and in high spirit. He further advised Sowore to bring that juju man to the venue of the next protests.

This is really a funny one from Senator Shehu Sani. But on the other side, the shooting of Omoyele Sowore should be condemned in its entirety. The police officer responsible for the shooting should be arrested and punished for doing so. We thank God Almighty that Omoyele Sowore is still alive.