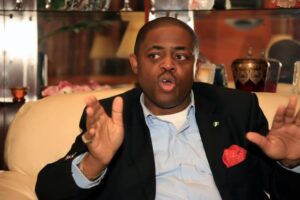 The former minister of aviation and chieftain of People Democratic Party(PDP), Chief Femi Fani-Kayode said majority of Nigerians are not interested in 2023 elections but in separation and referendum.

The outspoken politician made this statement during a press conference on Monday talking about the major problems facing Nigeria.

He noted that people across the country are no longer interested in talking about 2023 or restructuring but rather emphasizing separation and pulling out of the federation.

“What is knocking at our door today is nothing less than full-scale war.Every ethnic nationality in our country is arming up for that war.Most of our people are talking about separation, referendum and self-determination and they are angry”

Femi Fani-Kayode urged politicians holding high political office to start acknowledging the reality and start talking about it as the people have been pushed to the edge by the policies of the present administration.