Adamawa Govt Places Ban On Sale, Transportation Of Livestock To Lagos, Others 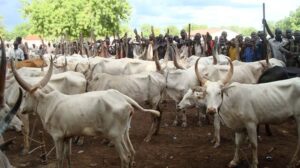 The Adamawa state government has announced the banning of the sale and interstate transportation of livestock.
The Secretary to the State Government, Bashir Ahmad, in a statement revealed that the reason the state took such a decision was due to the amount of levy placed on the livestock.

He went ahead to state that Lagos collects about N35,000 levy on a cattle and maintained that such high levy affects the amount of revenue generated per head of cattle.

Ahmad said that since they were solely responsible for rearing the cattle they would therefore harness the revenue made from it to improve the economy of the state.

According to him: “What we generate as revenue per head of cattle is low compared to what’s been collected along the road to the point of sale”

“People take cattle from Mubi market here, move it to Lagos, along the road they pay nothing less than N5000 per head in like, five revenue collection points.

“We concluded that as long as this thing starts from us, then we should be able to acrue revenue just as others are doing.

“As we’ve seen how much revenue is generated outside the state from our cattle, we decided to harness it to improve our economy.

“To achieve that from now, we will work on value-chain of the cattle by moving it from the market to an abattoir within the state, slaughter it, process it by separating the bones, the horns and we’ll package the beef for shipment to markets in Lagos and other states.”

YOU MAY ALSO LIKE:   CDS Irabor Exposes Soldiers Working With Boko Haram, Bandits, Others
Adamawa Govt Places Ban On Sale Others Transportation Of Livestock To Lagos 2022-02-19
Oluwasegun Adesuyi
Share