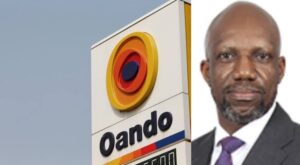 The Executive Director and Group Chief Finance Officer of Oando Plc, Olufemi Adeyemo, has resigned his appointment from the company and the board, the company has announced.

Adeyemo’s resignation is coming in the heat of the company’s participation in the importation of off-spec methanol blended fuel into the Nigerian market.

The company was one of the suppliers that imported the methanol blended petrol through four Premium Motor Spirit cargoes under its Direct Sales Direct Purchase arrangement.

But the company had denied participation in the importation of the off-spec petrol until the revelation made by the Nigerian National Petroleum Company Ltd.

“Adeyemo played a major role in the growth and success of the Oando Group. He was pivotal in the execution of several notable accomplishments, including but not limited to; the 2014 landmark acquisition of ConocoPhillips Nigerian assets, the 2015 Rights Issue, and various restructuring programs within the Group,” the company said of the former staff who joined back in October 2005.

The ex- director’s resignation became effective February 18, 2022 and he has been replaced by Mr. Adeola Ogunsem.

Ogunsem was the company’s Chief Financial Officer of Oando’s upstream division, Oando Energy Resources as he joined the company on January 01, 2012.

YOU MAY ALSO LIKE:   'Declaring Bandits As Terrorists Will Mark End Of Nigeria' - Sheikh Gumi Warns

The company said the new CFO has over 20 years of experience in the oil and gas industry.

Oando also expressed optimism that Ogunsem would make a positive contribution to the oil company.