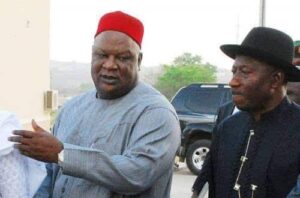 Buhari, who was represented by the Secretary to the Government of the Federation (SGF), Boss Mustapha, was accompanied by aides and other government officials.

Speaking at the event, Jonathan described Anyim as a humble man who did well to serve Nigeria creditably when he was Senate President and SGF.

The former president also stated that Anyim can do better “if given the opportunity” having done well in previous positions.

This newspaper reports that Anyim has declared his intention to contest for the presidency in 2023 on the platform of the Peoples Democratic Party (PDP).

YOU MAY ALSO LIKE:   Buhari Is Not As Powerful As You Think He Is – Fashola
Buhari Jonathan Sambo Attend Anyim Pius Anyim’s Birthday Party 2022-02-19
Oluwasegun Adesuyi
Share