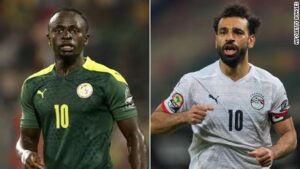 Liverpool manager, Jurgen Klopp has reacted to Mohamed Salah and Sadio Mane’s outstanding performances in the 2021 African Cup of Nations tournament.
Naija News reports that the two Reds’ forward helped their nation qualify for the finals after beating their opponents in the semi-final.

Reacting to the development, Klopp has told Salah and Mane that one of them will suffer heartbreak after full-time in the final match.

Egypt will face Senegal in the 2021 AFCON final this Sunday in Cameroon.

Klopp, however, during his pre-match press conference ahead of Liverpool’s FA Cup fourth-round tie against Cardiff City on Sunday, said it won’t be easy for one of the African players as one will win and the other will lose.

He commended the players saying “Great achievement for both [Salah and Mane] getting through to the [AFCON] final.”

Klopp added: “Naby [Keita of Guinea] played an exceptional tournament as well. So far, a really successful tournament for our boys and it will be exciting.

“It won’t be easy because one will be really happy afterwards and one less so. It’s a chance to achieve something really big.”

YOU MAY ALSO LIKE:   Breaking: Lagos Assembly Passes Bill Stopping Parade Of Suspects

Speaking on the availability of both Salah and Mane for Liverpool’s Premier League fixture against Leicester on Thursday, Klopp added: “I think they will be available, but we will see.

“Tuesday or Wednesday is the latest the winner will be back, the other slightly earlier. I have to talk to them. They have rhythm as they have played quite a few games!”

Previous “I have the Fulani brain to lead Nigeria” – Orji Kalu
Next BREAKING: Ex-Gov Oni dumps PDP for Ekiti 2022