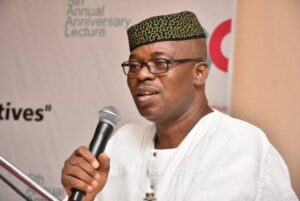 Ahead of the June 18 governorship poll in Ekiti State, former Governor Segun Oni and first-runner up in the just-concluded governorship primaries of the opposition People’s Democratic Party(PDP) has withdrawn his membership of the PDP.

The Director of Media and Publicity of Segun Oni Movement Adebayo Jackson confirmed this to The Nation in Ado-Ekiti, the Ekiti state on Saturday.

YOU MAY ALSO LIKE:   Just In: Riot In Ojodu Berger As Trailer crushes Seven Students to death

Oni has however not indicated the party he would be pitching tent with.

But speculations are rife that the Ex-Governor may join All Progressives Grand Alliance(AGPA) to contest the governorship poll.