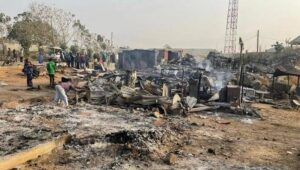 Students of Veritas University Abuja were thrown into panic in the early hours of Saturday, after fire razed some shops located within the boys hostel.

The incident occured in the early hours of Saturday at the campus located in Bwari Area Council of Federal Capital Territory.

The Veritas University Public Relation Officer, Evelyn Obekpa, who confirmed the incident to THE WHISTLER, said the institution received a distress call in the early hours of Saturday.

She said, “This is to react to the purported story making the round about a fire outbreak in Veritas University Abuja.

“Here is the truth. Five make-shift shops within the university campus were affected in a fire-out break at about 1am today, Saturday, 5th February 2022.

“Those shops are mostly kitchens operated by food vendors within the university. The extent of the damage is yet to be ascertained.

“The makeshifts are on the way that leads to the boys hostel, and among the shops affected is one that belongs to a bean cake seller.

“The person who fries Akara (bean cake) did not put off the fire properly and then took the wood into the shop, and that resulted to the raze. No casualty recorded so far. “

YOU MAY ALSO LIKE:   BREAKING: Nnamdi Kanu’s trial adjourned as FG fails to produce Him In Court

Obekpa stated that they contacted the Federal Fire Service immediately the fire was discovered, adding that the Service swiftly intervened.

The Federal Fire Service Public Relations Officer, Abraham Paul when contacted, confirmed the incident, adding that the cause of the fire could not be immediately ascertained.

He said, “We can confirm that we got a distress call around 1am today and we referred them to FCT Fire Service in Bwari. As to the level of damage and cause of the fire ,our investigators would hit the place and inform us after their investigation.”

YOU MAY ALSO LIKE:   Omokri Reacts As Bandits Kidnap 50 Wedding Guests In Sokoto

Veritas University is a private institution founded by the Catholic Bishops Conference of Nigeria through a resolution given at its March 2002 meeting in Abuja.

Previous BREAKING: Ex-Gov Oni dumps PDP for Ekiti 2022
Next Smuggling is the Mother of all Crime that Customs is Dealing with Technologically – Attah