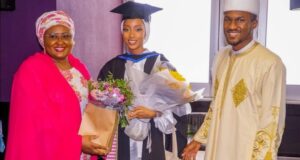 Nigeria’s First Lady Aisha Buhari has come under heavy criticism by citizens after she shared the graduation photos of her daughter-in-law across her social media pages on Tuesday.

Zahra Bayero-Buhari, who got married to President Muhammadu Buhari’s son, Yusuf, in August 2021, graduated from a UK university on Tuesday.

The First Lady, while celebrating her son’s wife and daughter of Nasiru Ado Bayero, Emir of Bichi, flooded her page with photos from the graduation ceremony, noting that Zahra graduated “with First Class Honors in Architectural Science.”

While some Nigerians shared in her joy, many who commented on the First Lady’s post accused her of “insensitivity” as the celebration came at a time when public universities have been shut down for seven months due to the ongoing strike by the Academic Staff Union of Universities (ASUU).

Mrs. Buhari also shared the photos days after National Association of Nigerian Students (NANs) staged protests in different parts of the country over the Federal Government’s failure to resolve the strike.

Among those who criticised the President’s Wife was a former minister in President Buhari’s cabinet, Solomon Dalung.

The former sports minister wrote under Aisha’s post: “The acceptable interpretation to say the least is an insult to the psyche of Nigerians. You used to stand with common people in the first tenure but this time around you have not only abandoned them but graduated into academy of tyranny. What makes her better than any other Nigerian child? Given the apportunity in foreign universities some would have graduated with Distinction. This is not only insensitive but disappointing my dear Wife of the President.”

The 2023 presidential candidate of Action Alliance, Omoyele Sowore, who also commented under the First Lady’s post said Nigerian leaders are unbothered about the ASUU strike because they afford to send their children abroad for studies.

YOU MAY ALSO LIKE:   Just In: FG, striking doctors reach agreement Over 12 Points Demand

“This is the reason their father Muhammadu Buhari shut down Nigerian public universities for 7 months now and still counting, because his children don’t go to schools in Nigeria and as you could tell they’ve used your resources to give their children the best education money can buy. Nigerians!!! You see why you need a #Revolutionnnow?” wrote Sowore.