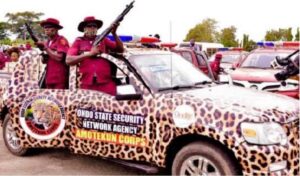 Eyewitnesses told Blaze Newz that one Afeez Lotto and Akin Owoaga were shot dead by a member of Odua people Congress, who was recruited into Amotekun, Sikiru Apanpa.

Our correspondent gathered that the incident started when youths in the area disagreed on a certain issue, and Lotto had invited the Amotekun personnel to control the situation.

Blaze Newz learnt that when Amotekun personnel arrived at the scene of the incident with their vehicle, Apanpa did not ask questions before he shot at the two.

It was gathered that the two victims died instantly.

While going out of the community, the men of the Amotekun also shot at an old man, Matthew Owolabi, at Ike Olu junction who later reported at Mapo and Babaganku Police Stations.

Following the development, the men of the Nigeria Police Force, Mapo Area Command, Ibadan, arrested Saheed who invited Amotekun to produce the killer of the two victims

Previous Group Begins protest In Osun, demands end to security, bad governance in Nigeria
Next “I’m leaving because the club no longer has the faith in me” – Zidane writes open letter to Madrid fans