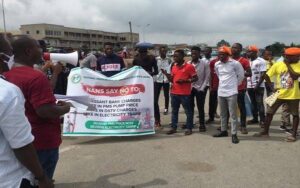 The protest, according to the Convener, (Comrade Waheed Lawal), is to sensitize residents of the state to always stand against injustice and maladministration rather than dying in silence.

YOU MAY ALSO LIKE:   PDP BoT Chairman Threatens To Expose Obasanjo’s Secrets, Gives Him 48 Hours Ultimatum

The protesters took off from the popular Freedom Park at Old Garage and marched through station road where they addressed shop owners around Fagbewesa junction on the need to join the advocacy for better Nigeria.

Comrade Waheed Saka who spoke at the Fagbewesa junction said that despite the human and natural resources the country is endowed with, poor leadership has put the country in the wrong direction leading to untold hardship among the masses

Previous Sowore was not shot by our officers, they only restored calm at unity foundation – FCT Police
Next Amotekun Personnel Open fire in Oyo, kill two, Injure one