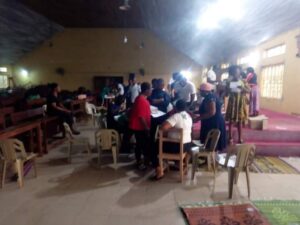 The result sheets sighted by agents and voters in the ongoing governorship election were said to be fake, thus leading to spontaneous protest.

YOU MAY ALSO LIKE:   Omokri Reacts As Bandits Kidnap 50 Wedding Guests In Sokoto

A Peoples Democratic Party (PDP) member, Chima Christian, told journalists that, “We have refused the commencement of accreditation and voting because the INEC officials did not come with original result sheet.

“Until we sight the election result sheet, voting will not commence.

“Those preparing to write election results in their hotel rooms will meet their waterloo today,” he said

As at the time of filling this report, no security agent could be sighted according to agencies while the situation has not been brought under control.