Anambra Gov’ship election: “The Race Is over” – Soludo Boasts 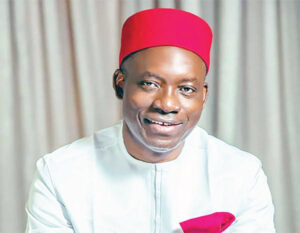 Professor Charles Chukwuma Soludo, the candidate of the All Progressives Grand Alliance (APGA) in the Anambra State Governorship election 2021, on Tuesday declared that the race is “over”.

POLITICS NIGERIA reports that following the declaration of the Anambra State Governorship election as inconclusive by the Independent National Electoral Commission (INEC), there is tension in Ihiala Local Government Area (LGA) as the electoral umpire holds supplementary poll in the area today.

YOU MAY ALSO LIKE:   Magodo Estate Shut Again As Residents Protest Presence Of Over 50 Armed Policemen

Per the results declared by INEC on Sunday in 20 local government areas, APGA’s candidate, Prof Soludo, is leading in 18 with a total of 103,946 votes, followed by the Peoples Democratic Party (PDP’s) Valentine Ozigbo with 51,322 and the All Progressives Congress (APC’s) Andy Uba with 42,942.

The election held on Saturday, and was declared inconclusive by INEC the following day.

The supplementary election in Ihiala is holding today, November 9, 2021, and Soludo insists nothing can stop his triumph.

“Let’s do a simple math. Ihiala has 148,000 registered voters but only 42,000 voters picked up their PVC. So INEC statistics shows that you won’t get more than 42,000 votes in Ihiala. It is game over,” a post on Soludo’s known Facebook page reads on Tuesday morning.