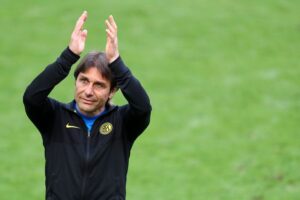 Antonio Conte has left Inter Milan by mutual consent, with Simone Inzaghi likely to replace him as head coach of the Serie A champions.

Conte has agreed a deal with the club’s owners which will see him paid €7m (£6m) for the final year of his contract.

The former Chelsea boss guided Inter to their first Serie A title in 11 years but was embroiled in a dispute with the club’s owners after they proposed a downsizing of his squad.

Inter chairman Steven Zhang reportedly asked Conte to cut his wage bill by 15 to 20 per cent and potentially sell players worth up to £70m this summer.

A club statement read: “FC Internazionale Milano announces that it has reached an agreement for the consensual termination of the contract with the coach Antonio Conte.

“The whole club would like to thank Antonio for the extraordinary work he has done, which culminated in winning the 19th Scudetto. Antonio Conte will remain forever in the history of our club.”

Conte was keen to keep up to eight players he sees as “untouchables” which include Milan Skriniar, Romelu Lukaku and Lautaro Martinez.

Lukaku is happy at Inter but Conte’s departure, coupled with the club needing to cut costs, has put a question mark over his status at the club.

The club’s strategy, according to Sky in Italy, could include the sale of one of the club’s star players and a move to focus on developing young talent.

Lazio manager Inzaghi is set to replace Conte at the San Siro. The former Italy striker has been in charge of the Rome club since 2016 and led them to a sixth-place finish this season, finishing six points above fierce rivals Roma.

“Antonio Conte is one of the best managers in the world, and this evening he is unemployed, although he has got €7m pay-off from Inter Milan. There had been crunch talks going on all day about his future and he was very unhappy about the fact that the owners of the club had asked him just a few days after winning the Italian title for the first time in 11 years to cut costs.

“They wanted him to shave around €100m off Inter’s budget for next season and Conte was very unhappy about that. He basically said that he had won the title, he had done what had been asked of him, but when it came to Europe, they had finished bottom of their Champions League group.

“Next season, he wanted to win the title again and to win the Champions League. He wanted to make them a force in Europe again as well, and he claimed he would not be able to do that if they were asking him to sell some of his best players to cut the wage bill. He said he could not manage with one hand tied behind his back and that’s the reason why he has decided to go.

Inter Milan&#39;s Lautaro Martinez celebrates after he scored his side&#39;s fifth
Image:
Uncertainty remains over several of star players including Lautaro Martinez
“He had one year remaining on his contract worth around €11m after tax, so a lot of the talks today were around what the pay-off was going to be. The question people will be asking is why Inter’s owners have allowed this to happen? This is a manager who has won titles at Juventus as both a player and as a manager. He’s someone who has won titles at Chelsea and he’s done it again at Inter.

YOU MAY ALSO LIKE:   Insecurity: How Abdulrazaq Unifies Diversity To Drive Harmony

“The owners of Inter are a Chinese retail giant called Suning, who also owned the reigning Chinese Super League champions Jiangsu Suning. They won the Chinese title in November but just a few months later, Suning turned around and said they were closing the club down due to financial problems.

“They wanted to step back from football, and that’s exactly what they have done at their other club as well, Inter Milan. They felt it was costing them too much money. Conte has heard what they have had to say and decided this is not how he operates.”