Home / cover / APC Faction In Rivers Roots For Tinubu, Says Age Is Not Barrier But Competence

APC Faction In Rivers Roots For Tinubu, Says Age Is Not Barrier But Competence 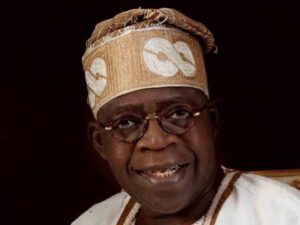 The Presidential aspiration of the National Leader of the All Progressives Congress, Mr Bola Tinubu, received a boost on Saturday when some frontline members of the party in Rivers State announced their unalloyed support for him.

Mr Magnus Abe, who is leading the factional group of the party in the state opposing the Minister of Transportation, Mr Rotimi Amaechi, came out in large number to announce their unbridled support for Mr Tinubu, who, even though has not announced his intention for the Presidency in 2023, has seen his ambition ballooned lately.

YOU MAY ALSO LIKE:   APC Convention: Group Warns Buni Caretaker Committee Not To Change February Date

Currently, there are over 100 support groups advancing his political interest to capture the 2023 presidential election.

Abe, staking a claim for Tinubu, promised to deliver Rivers State for the man regarded as laying modern foundation for Lagos State.

He said Tinubu’s victory was sure once he secure the party’s presidential ticket in 2023.

Consequently, he alongside some party bigwigs floated the Bola Tinubu Vanguard in Port Harcourt.

Speaking alongside Abe was Worgu Boms, who is the former Attorney General of Rivers State and Director General of Freedom House. He said it has become clear that the APC national leader will emerge president come 2023.

“It has become clearer that Tinubu will be president. When Tinubu becomes president, everybody will chop; it’s not like this one that only one man is chopping.

YOU MAY ALSO LIKE:   POLARIS BANK N26M Promo Offer: Customers Warm Up for ‘Grand Finale

“We were the ones that made Buhari president; we will make Tinubu president.”

On his part, Senator Wilson Ake said one thing Tinubu has going for him over his contenders for the priced APC presidential ticket is competence.

“When Tinubu was working for APC, nobody talked about his age. Now they are saying he is old. When you say ‘age-age-age’, you are not serious. Competence should not be traded for age. The young local government chairmen that we have, are they doing anything spectacular?”

YOU MAY ALSO LIKE:   Akeredolu Reacts To Northern Govs’ Position On 2023 Presidency Zoning
APC Faction In Rivers Roots For Tinubu 2021-11-13
Oluwasegun Adesuyi
Share

Previous Ugwuanyi Assures Support for Woman Whose Son was Killed by Husband for Money Ritual
Next Days After Death Rumor, Olu Jacobs Steps Out With Wife, Joke Silva