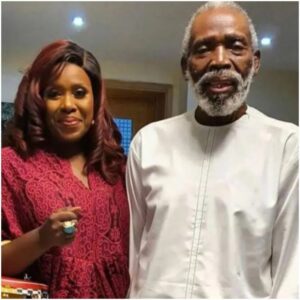 Veteran Nollywood actor, Olu Jacobs has stepped out with his wife and veteran actress, Joke Silva to attend the Afriff Global award which was held in Lagos State.
This comes days after news of Olu Jacobs death began to make rounds like wildfire on social media.

In the photos shared by his wife via her social media handle, the 79-year old is looking hale and healthy.

YOU MAY ALSO LIKE:   Nigeria To Host 2019 African Netpreneurs Conference

This is coming after fans of the legendary actor expressed concerns over the new look of the 79-year-old actor, as he appeared to have lost a lot of weight.

However, in a chat with The PUNCH, Joke Silva said her husband was hale and hearty.

She said, “Good day good people. Trust you all are good? This is just to inform you that Sir J (Olu Jacobs MFR), as we fondly call him is alive and enjoying his singing lessons. He wants to add dancing but I have advised he wait a bit. So, to all those carrying false rumours, remember it is a criminal offence. Desist or legal action will be taken. Signed Joke Silva (MFR) AKA Mrs Ajoke Jacobs.”

YOU MAY ALSO LIKE:   Police Sends Strong Warning To Cultists Ahead Of July 7 Cultism Day
Joke Silva Olu Jacobs Steps Out With Wife 2021-11-14
Oluwasegun Adesuyi
Share

Previous APC Faction In Rivers Roots For Tinubu, Says Age Is Not Barrier But Competence
Next Sudan army general establishes ruling council with no civilian majority