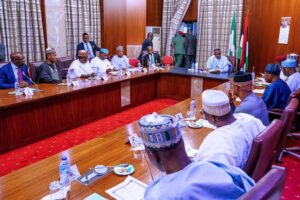 President Muhammadu Buhari is currently in a closed-door meeting with Governors elected on the platform of the All Progressives Congress, APC, from the northern region.
Naija News learnt that the meeting is being held at the Presidential Villa, Abuja.

Reports confirmed that while other concerned governors are already on sit, Kogi State Governor Yahaya Bello is nowhere to be found as of reporting time.

YOU MAY ALSO LIKE:   Kebbi: Bandits Kill 76 Security Personnel,Vigilante In Two Days

Naija News understands that the ruling party commenced processes for its presidential primaries on Monday ahead the 2023 general elections.

Although President Buhari has maintained his position on the consensus arrangement, there has not been any agreement among the 23 APC presidential aspirants screened last week.

Hopefully, the meeting with the APC governors from the north would ease the party’s effort to get a consensus candidate so as to reduce acrimony that may arise at the end of the convention.