JUST IN: Osinbajo Not Involved In Accident…He Stopped To Assist Victims – Aide 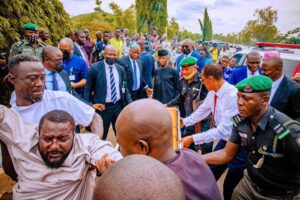 An aide to Vice President Yemi Osinbajo has debunked reports that the convoy of the Vice President was involved in a road accident along Airport Road, Abuja.

Laolu Akande, Senior Special Assistant on Media and Publicity to Vice President, said in a tweet on Monday that contrary to media reports, Osinbajo’s convoy stopped to assist victims of the road crash before proceeding to Owo, Ondo State, on a condolence visit over the killing of many worshippers in the town on Sunday.

YOU MAY ALSO LIKE:   2023: Dele Momodu Knocks RCCG Over Creation Of Directorate Of Politics

Some media reports, not THE WHISTLER, had alleged that one of the vehicles conveying the Vice President’s aides somersaulted while making its way to the Nnamdi Azikiwe International Airport.

Akande, however, described the reports as untrue, saying that Osinbajo’s convoy ambulance was only used to convey the victims to a hospital.

Vice President Yemi Osinbajo assists accident victims in Abuja.
“On his way to the airport this morning, VP came across a road traffic accident, stopped to lend assistance, & ensured victim was taken to the hospital with VP’s convoy ambulance. He then proceeded on his trip and is now in Ondo State heading to site of yesterday’s attack in Owo,” the tweet read.

“VP’s medical and security teams quickly intervened removing the victim from the crushed car which somersaulted on the opposite side of the road and got stuck on a tree. Victim now moved to an hospital,” he added.

Tags JUST IN: Osinbajo Not Involved In Accident…He Stopped To Assist Victims – Aide