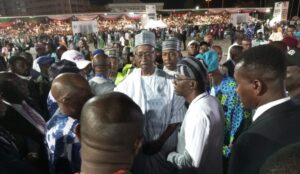 Voting exercise at the ongoing National Convention of the All Progressives Congress in Abuja to elect the presidential candidate of the party has been suspended.

The suspension was announced at exactly 03:15am after former Minister of Transportation, Rotimi Amaechi, stormed the voting area and complained bitterly to electoral officers manning the polling votes about irregularities.

Consequently, Atiku Bagudu, the Kebbi State Governor, who doubled as the Chairman of the Electoral Committee, made the announcement directing the halt to the voting exercise while tasking the security agents to clear the voting arena.

He further directed that only security agents and agents of aspirants, who should be two each, be allowed around the voting corridor after a proper clearance has been made.

Nasarawa State Governor, Abdullahi Sule, later joined them to calm the situation for voting to resume.

This was as delegates and supporters of one of the aspirants, Dave Umahi, Governor of Ebonyi State, accused the electoral officers of manipulation.

They accused the officers of speaking South Western dialect and directing those voting on what to write.

YOU MAY ALSO LIKE:   It’s Appalling Kukah Castigated Us Before U.S. Congress — Presidency

Delegates were asked to simply write the name of the aspirant they want, forcing some who are not schooled enough to require help.

It was in that process that accusations and counter accusations of rigging began, thereby forcing a halt to the voting exercise.

As at 3:34 am when this report was filed, voting has not resumed.

YOU MAY ALSO LIKE:   See What President Buhari Discussed With Security Chiefs In Aso Rock
Apc primary 2022-06-08
Oluwasegun Adesuyi
Share