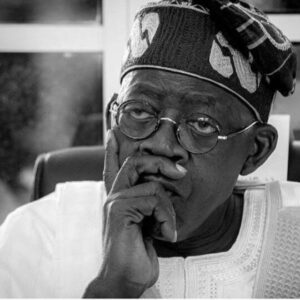 A presidential aspirant of the All Progressives Congress (APC), Asiwaju Bola Ahmed Tinubu, has disowned a viral text message alleging that he plans to pick a fellow Muslim as his running mate if he emerges as the ruling party’s 2023 presidential candidate.

Tinubu said the text message is being circulated to delegates while the APC presidential primary election is ongoing.

According o him, the ‘fake’ text message was fashioned by “undemocratic elements” whom he said are already intimidated by his “imminent victory” at the poll.

A statement issued by his media office on Tuesday midnight reads: “We have been informed of a text message going round APC delegates at Eagle Square, Abuja purportedly from Asiwaju Bola Ahmed Tinubu, claiming that with his imminent victory at the APC Presidential Primary and emergence as the party’s presidential candidate, the APC leader has now decided on a Muslim-Muslim ticket.

“This is nothing but a lie. It has no basis whatsoever. We enjoin the distinguished delegates to ignore this completely.
“The fake text message is a ploy by some undemocratic elements to confuse and hoodwink delegates sensing that Asíwájú Tinubu is comfortably coasting home to victory.

“Truth is Asíwájú is destined for victory and no one can scuttle this through their shameful tactics.

“Asíwájú is not known to jumping guns. He will deal with all important matters pertaining to his presidential pair at the appropriate time, after his victory has been fully established by the distinguished delegates.”

At least seven aspirants have so far stepped down and backed Tinubu to pick the APC presidential ticket.

YOU MAY ALSO LIKE:   Oyebanji: ‘Why I Am Withholding My Congratulations, Despite INEC Declaration’ – Oni, SDP Candidate

No fewer than fourteen governors are also said to be rooting for the Tinubu for the 2023 presidency.

THE WHISTLER, however, reported earlier that Vice President Yemi Osinbajo refused to imitate other southern leaders who have withdrawn from the race to support his former boss and political godfather.

Osinbajo had told delegates at the Eagle Square venue of the presidential primary that “You cannot wish this country well and vote for someone you don’t believe in.”