Home / cover / ‘Arresting Kidnappers, Bandits Is A Waste Of Time, They Should Be Killed On Sight’ – Pastor Enenche Tells Security Agencies

‘Arresting Kidnappers, Bandits Is A Waste Of Time, They Should Be Killed On Sight’ – Pastor Enenche Tells Security Agencies 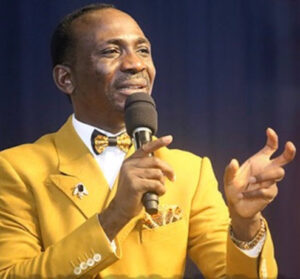 ‘Arresting Kidnappers, Bandits Is A Waste Of Time, They Should Be Killed On Sight’ – Pastor Enenche Tells Security Agencies

The Senior Pastor and founder of the Dunamis International Gospel Centre, Pastor Paul Enenche, has suggested that kidnappers terrorizing the country should be killed on sight.

The respected clergy is quoted to have said this while preaching live at his church on Wednesday.

Lamenting the spate of insecurity in the country, Pastor Enenche slammed security agencies for arresting kidnappers who have plunged the entire nation into pandemonium.

According To Naija News, the clergyman described the arrest and detention of the terrorists as a waste of time. Enenche suggested that whoever killed should also be killed.

“The kidnappers that they are arresting is a waste of time. That is why there is evil in this land. When you catch them, waste them”, DailyPost quoted Enenche as saying.

To support his suggestion, Pastor Enenche quoted a portion of the Holy Bible which reads: “And he that stealeth a man, and selleth him, or if he be found in his hand, he shall surely be put to death” – Exodus 21:16.

The clergy, however, admonished members of the affected communities, particularly the local security operatives to wake up to their responsibilities and protect their land.

YOU MAY ALSO LIKE:   Jealousy, Greed and Selfishness from Shina Peters is hindering Juju Music Growth - Yinka Best

“Every community wake-up for your people, every security man should rise up. The enemies of Nigeria will not see our end. We shall see theirs,” Enenche said.

He added, “I pray that God will help our military and paramilitary to wake up so that the villagers don’t take the glory of what is due for our forces.”

YOU MAY ALSO LIKE:   BREAKING: Thugs Chase Akeredolu’s Wife Out Of APC Secretariat In Imo

Expressing hope of a better Nigeria, Pastor Enenche said, “Very soon the terrorists will begin to die mysteriously. They won’t even need to face hunters, they will be dying mysteriously.

“The bandits and those sponsoring them will have encounter in the night that will bury them permanently.”

YOU MAY ALSO LIKE:   BREAKING: I Only meet Dangerous bandits ‘For The Sake of Nigerians, Not For Political Gains’ – Sheikh Gumi [VIDEO]
‘Arresting Kidnappers Bandits Is A Waste Of Time They Should Be Killed On Sight’ – Pastor Enenche Tells Security Agencies 2021-09-30
Oluwasegun Adesuyi
Share