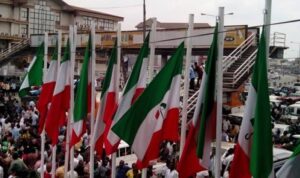 The next national chairman of the Peoples Democratic Party (PDP) will emerge from the northern region of the country, the party’s National Zoning Committee has announced.

Chairman of the committee and Governor Ifeanyi Ugwuanyi of Enugu state announced this at the end of a meeting in Abuja on Thursday.

“The decision of the PDP Zoning Committee is in line with the Constitution of the party on zoning and rotation of party and national offices in the interest of justice, equity, and fairness.

“Consequently, the current offices being held by officers in the southern zones of the country, namely South West, South East, and South South zones, should swap places with the offices currently in the northern zones of Nigeria, namely North West, North East, and North Central zones”, the statement read.

Previous ‘Arresting Kidnappers, Bandits Is A Waste Of Time, They Should Be Killed On Sight’ – Pastor Enenche Tells Security Agencies
Next Ogun Assembly asked to impeach Gov Abiodun, Deputy over alleged abdication