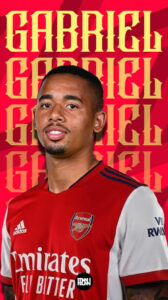 The Brazilian will wear the No. 9 shirt which was worn by Alexandre Lacazette who return to Lyon.

Mikel Arteta, Arsenal’s coach had worked with Jesus when he was assistant coach to Pep Guardiola at City from 2016 to 2019.

City are hoping to sign Erling Haaland from Borussia Dortmund.

Arteta said, “The club has done a tremendous job to recruit a player of this stature. I know Gabriel personally very well, and we all know him well from his time in the Premier League and being really successful here.

“This is a position that’s been on our radar for a long time now and we have managed to get a player that we all wanted, so I’m really happy.”

Jesus said in an interview with Arsenal that, “I am so happy to be here to help. I come to help, to learn as well, and to try to do my best.

YOU MAY ALSO LIKE:   Be Responsible For Your Own Safety – Nigerian Govt Advise Citizens In Ukraine

“We (Arterta) spoke a couple of times about the club, the players, the project and the future. I believe 100 per cent in Mikel. I had a very good time with him before, he’s a very good guy and a very good coach as well.

“He helped me a lot [at Manchester City]. We would always stick together after the training sessions and do some finishing or something. He’s a very intelligent guy and was an amazing player, so if he knows something he can teach me or the young players.”