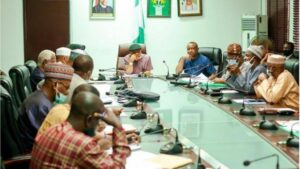 The Academic Staff Union of Universities (ASUU) has revealed its next line of action after the Federal Government failed to honour the agreement it entered into with the union.

ASUU president, Professor Emmanuel Osodeke, had earlier alleged that the government has not been picking calls pushed through by the union.

The varsity lecturers had called off their eight-month-old strike in December 2020 after ASUU signed a Memorandum of Understanding (MoU) with the government. Minister of Labour and Employment, Chris Ngige had met with the lecturers on August 2 to review the level of implementation of the MoU after several complaints by the academic union.

Ngige at the time assured ASUU that government will through the Central Bank of Nigeria (CBN), release N30 billion as a revitalisation fund to the union the following week.

However, the government has not yet fulfilled its promises to the union and the month of August has ended.

ASUU, in this regard, said it will hold an emergency National Executive Council (NEC) this week with its leaders and principal officials to decide its members’ next line of action.

The varsity union said it will follow up its NEC meeting with consultations with all its chapters should the government fail to respond positively to the aggrieved lecturers.

YOU MAY ALSO LIKE:   Reps summon Malami, Emefiele, Ahmed, over looted assets

ASUU said Nigerians should hold the government responsible for their next action. Naija News understands that the Federal Government has not spoken on the latest agitations by the varsity teachers.

Osodeke stressed that the union’s NEC would convene to weigh available options and take a position.