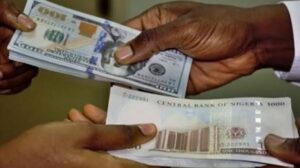 After consecutive devaluation, the Naira posted a gain against the US dollar at both the official and unofficial market windows of the forex market on Tuesday.

But the local currency closed flat against the Pound Sterling at the black market at N715/£1 and appreciated by N4 against the Euro to N612/€1 from N616/€1.

Similarly, data posted on the FMDQ Security Exchange window where forex is officially traded showed that the naira closed at N411.08 per $1 at the official market on Tuesday.

This translates to a N0.55 or 0.13 percent rise from the N411.63 rate recorded in the previous session on Monday

A low turnover, which resulted in ease in pressure, was one of the reasons for the gains posted by the local currency yesterday at the market segment

The Forex turnover recorded at the market segment was pegged at $72.50 million against the $81.81 million achieved at the preceding session, indicating a $9.31 million or 11.4 per cent decrease in the market turnover.