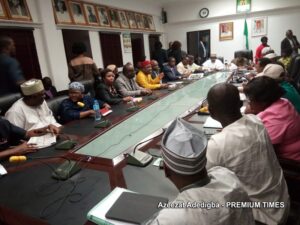 The Academic Staff Union of Universities (ASUU) has denied requesting a fresh N1tr from the federal government as a condition to end its ongoing strike action.
The report of the huge cash demand was denied on Sunday by the National Chairman of ASUU, Professor Emmanuel Osodeke.

Societygazette reports that Osodeke made the denial in reaction to reports that the academic union had laid fresh monetary demand of N1tr to end the ongoing strike action by University lecturers which commenced on 14th February 2022.

YOU MAY ALSO LIKE:   His Agenda Is SIMPLE, His Promises Are Realistic by Stanley Chiamaka

While acknowledging that little progress has been made in negotiations with the federal government, the ASUU president denied making such monetary requests.

“The outcome of that meeting was reported. Nobody mentioned N1 trillion. We don’t respond to all these rumours. What we’re demanding is coming after the government agreed to spend N1.3 trillion in 2009,” the ASUU president was quoted by The Cable to have said.

“It was to be released N200 billion per year for five or six years. They didn’t do that which is what we’re asking for,” he added.

Earlier, Naija News had reported that the President Muhammadu Buhari-led government has been accused by the Academic Staff Union of Universities (ASUU) of showing levity in its negotiation with its members.

The President of ASUU, Emmanuel Osodeke noted that ending the industrial action is dependent on the readiness of the Federal Government

He stated that the strike will end if the Federal Government take the issue with importance and do the needful.

Osodeke further stated that the last meeting between its members and the federal government was not productive because the government team acted as if it did not know the issues at stake.