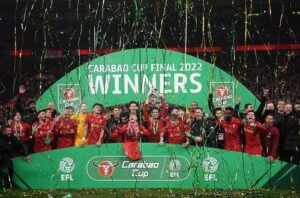 The Reds clinched the trophy at Wembley on Sunday afternoon after winning a penalty shootout 11-10 following a thrilling goalless draw with Chelsea after extra-time at Wembley.

Liverpool are therefore now the outright most successful team in League Cup history, having been level with Manchester City on eight victories before Sunday’s result.