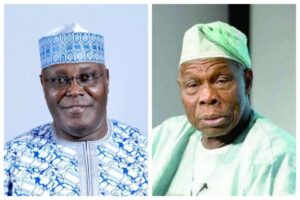 Speaking about the process that led to the emergence of his Vice, Obasanjo, who was interacting with some secondary school students at the Olusegun Obasanjo Presidential Library (OOPL), Abeokuta, Ogun State, said he made a mistake while picking his running mate during the civil rule.

YOU MAY ALSO LIKE:   How Police and Judiciary frustrate 13 Years Old JSS1 Boy Raped in Kano from getting justice

“One of the mistakes I made was picking my number two when I wanted to become the president. But because it was a genuine mistake, God saved me,” Obasanjo said.

Responding to the former president in a tweet, Shehu, who is a member of the Atiku Abubakar presidential election technical committee, said Obasanjo was “still bitter” that Atiku frustrated his tenure elongation agenda, otherwise known as the ‘Third Term Agenda’ in 2007.

“Surprisingly, OBJ is still bitter about his failed 3rd term agenda. Although the PDP family holds him in high esteem, his recent statement is unbecoming. Had @atiku not fought that selfish and unconditional drive, Yar’adua, Jonathan, and Buhari wouldn’t have sniffed the presidency,” tweeted Shehu.