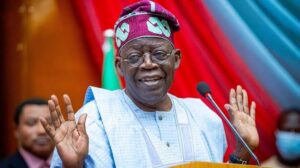 The man called Asiwaju Bola Ahmed Tinubu (BAT) is an enigma.
I have  known him since 1994 or so, and he actively  enjoys his mystique, and luxuriates in powers assigned to him that he really does not always have.   Despite everything said about him,  many SW Yoruba  people and the rest of Nigeria are probably intrigued, even enamored  about his rags-to-riches,  nothing-to-something rise to power.
BAT’s opponents do not seem to fully understand that the mystery behind his origins give him an unusual mystique.  It is  said he is from Iragbiji, not Lagos.  It is said that his mother is not Madame Tinubu.  It is said that he did not go to GCI as claimed, or that it was Chicago State University, not University of Chicago, that he attended.  His primary school is now a mystery.   It is said that he is 84 years old not 70 or even 72.
Oooo…mo gbo.  Up until today, the Yoruba still discuss the origins of our progenitor Oduduwa, whether he came from New Bussa then through Old Oyo, or from Egypt (as Lamurudu),  or from Benin (as Ozoduwa or  Ekhalredan) – or whether he merely dropped from the sky.  The “atapatadide” person is kind of celebrated in our clime, the silver-spoon-fed child dismissed as a lucky blighter.
My advice to BAT’s political opponents is that it is his political achievements – or lack of them – and his promises – and perceived (in)ability to achieve them –  that should be interrogated, not his historical origins.  He is not an angel, but who is, and he has not been walking along papal corridors.
Yes, attack BAT’s political  achievements and wealthy circumstances with facts and figures – that is fair game –  but not with insinuations and innuendoes and fake dated documents.  However you will also have to explain how this Hercules of an Oduduwa-like fellow could have done all of these things alone all of these years…
I am not uncomfortable with spotlights on BAT. I am merely advising that energy be appropriately directed.
Now If you go into the archives, you will read that in 1999  I was one of the most ardent defenders of BAT during the  travails leading  to his governorship in 1999, as I used my own knowledge of the US academic record idiosyncrasies to defend him.  Even many PDMers attacked him and myself then, but I understood very well the Afikuyomi angle of the story.  I remember late Dr. Beko Ransome-Kuti once calling me from Lagos to ask what the hullabaloo was about University of Chicago and Chicago State University….”Sebi varsity ni Chicago ni awon mejeji?” So when I carefully explained the difference in terms of national ranking and international reputation, and  that BAT took courses in both but his degree is really in only one of them,  Beko just hissed in his inimitable manner and said “Kan fi Bola sile ojare! University ewo ni Nigeria lo better Chicago State University?”
My defence – or even explanation – of BAT has nothing to do with our both being Yoruba.  In fact, some of his most ardent critics are Yoruba.  But I always resist  the subtle blackmail in Nigeria where every ethnic group defends its own right or wrong, but when a Yoruba defends a Yoruba, he is accused of being an ethnicist.
The fact of the matter is that Nigeria is still just a country,  not a nation of shared values yet, but one of a nation of nations.  So it behooves of us public intellectuals to be honest enough to admit that in our interactions with each other, there may be cultural nuances that we exhibit that grate each other.  Explanations are not necessarily excuses.
Finally, will BAT emerge as Nigeria’s president in 2023?  There is nothing more difficult to predict than the future, but he stands a good chance against the present co-contestants.  Indeed, o le je eleyi to nje Bola Ahmed Tinubu lo kan!
There you have it.
Bolaji Aluko
June  26, 2022
YOU MAY ALSO LIKE:   Amotekun Warned: Foreign Herdsmen Are In Our Forests
BAT Sunday Musings: My Position on Bola Ahmed Tinubu (BAT) - Prof Bolaji Aluko 2022-06-26
society_admin
Share