Aubameyang Reveals What Arteta Told Him Before Dumping Arsenal 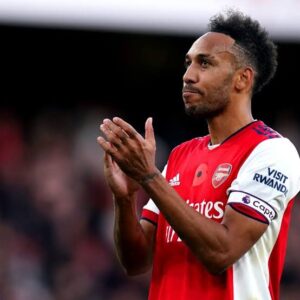 Former Arsenal captain, Pierre-Emerick Aubameyang on Tuesday revealed what Mikel Arteta told him before his exit from the club.
The Gabonese striker dumped the Gunners to join Barcelona as a free agent in the January transfer market after his contract with the club was terminated.

Aubameyang was stripped of the captaincy at the North London side following a disciplinary breach, which saw him dumped from the starting lineup.

YOU MAY ALSO LIKE:   NOVA Merchant Bank Appointed by the Nigeria Customs Service as a Duty Collecting Bank

The striker who had his first league start on Sunday scored a hat-trick in a 4-2 victory over Valencia.

Aubameyang while speaking on his move to Camp Nou said Arteta wished him luck ahead of his move to the club.

The striker while speaking with Mundo Deportivo said, “Yes, Arteta wished me luck at Barca.

“Some of the things we did with Arteta are similar.

YOU MAY ALSO LIKE:   President Buhari Commend the Army for Professionalism, Commissions Army Cyber Warfare Headquarters

“I still have to get used to it but I am eager to learn. When I see how the boys play I want to do the same.”

Tags Aubameyang Reveals What Arteta Told Him Before Dumping Arsenal

Previous Potable Stabs Best Friend To Death In Ekiti Over Thirty Naira
Next FUNKE ASHEKUN YOU ARE A FRAUD AND AN INGRATE,HOW DARE YOU?