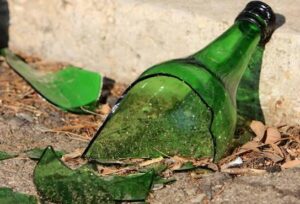 A young man identified simply as Potable has allegedly stabbed his best friend to death in Ekiti State.
Reports had it that a fight broke out between Potable and his friend Amos Ayoola Ajayi while chilling at a beer parlour joint, in Irona area of Ado Ekiti.

Naija News learnt that Potable, in the process suddenly broke a bottle and stabbed Ajayi multiple times, leading to his death.

The suspect who resides in Itapa Ekiti is said to have reportedly being the bestman to Ajayi during his wedding in 2014.

YOU MAY ALSO LIKE:   Tinubu Visits Pastor Adeboye Over Muslim-Muslim Ticket

However, their long time relationship bond broke on Sunday afternoon after a hot argument over the sum of thirty naira.

Though Ajayi was reportedly rushed to the hospital, he, however, died while receiving treatment.

It was gathered that the argument between the duo had already been resolved and Ajayi had taken his seat to continue with his beer.

The whole place, however, got stirred up after Potable reappeared with a broken bottle, with which he stabbed Ajayi on several spots including his neck.

The suspected killer, according to reports, has been arrested by the police.

YOU MAY ALSO LIKE:   BREAKING: Many trapped as 21-storey building collapses in Lagos

No statement, however, has been made by the police spokesperson in Ekiti State, ASP Sunday Abutu who had reportedly promised to get back to DAILY POST on the disturbing matter.

Recently a woman identified as Omoyeni Opeyemi was sentenced to forty-two months in prison for allegedly inflicting injuries on her househelp.

Naija News reports that the accused was declared guilty of the offences on Monday, February 14, by a magistrate court sitting in Akure, Ondo State capital.

The widow who is a residence of Adebowale Street, in the Akure South Local Government Area of Ondo State is said to have used knife, and razor blades to brutalize Joel Sunday, her househelp.

During interrogation, it was disclosed that Omoyemi confessed to torturing Sunday for stealing meat and making her incur a debt of N100,000.

Narrating the incident in court, Police prosecutor, Mr Emmanuel Tanimowo said the crime was reported to the police by a community health worker, Mrs Alice Ayedun.